"You Don't Have to Leave the State to Recreate"

In 1997, at just 21 years old, Joel Bryan received a phone call that would change his life. His aunts and uncles, who took over for Joel's grandfather as the owners of the former Fun Valley Ski Area in his hometown of Montezuma, were calling with a huge opportunity. The family had recently purchased another ski area in Boone and wanted their nephew to run it.

After graduating from the University of Northern Iowa with a degree in general studies, Joel always assumed he would end up working for John Deere, a place he could use his education and show his work ethic.

However, working at Fun Valley throughout his childhood had taught Joel the ropes of the industry, and being a true outdoorsman encouraged him to embrace the opportunity to do what he loves and improve Iowa’s outdoor recreation. So, he said yes to Seven Oaks Recreation. 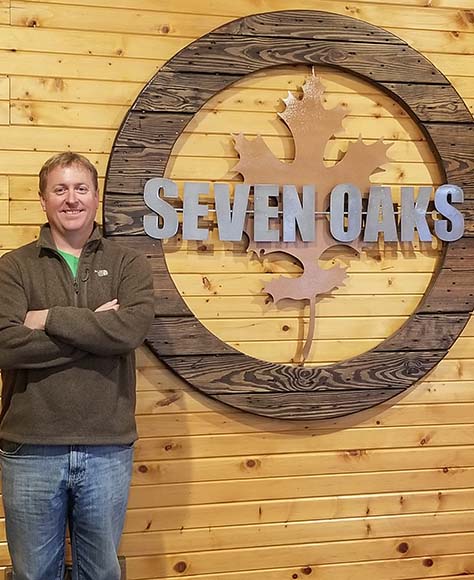 “It was a little bit of determination and a little bit of stupidity,” Joel joked. “I knew growing up that I just loved to work, and I knew I could make this happen. I gave up my life and dedicated 100 percent to this facility.”

A few days later, Joel arrived at the property with a truck, trailer, chainsaws and an abundance of energy and vision. He set to work clearing the area’s eight original slopes and fixing the old rope tows. As the only off-season employee, he was putting in 80 to 100-hour weeks, fixing what he could with what little funding the family had.

Once the ski area was up and running, there were still setbacks and challenges. In addition to being a seasonal attraction, low attendance during the winter season hindered Seven Oaks’ success. Then, a banker told the family they were going to lose everything, but Joel refused to let it go.

“My dad sat down with me and told him that I didn’t have any money, I was broke at that point, but I’d give him everything I had,” Joel said. “It was our dream to keep it up and running.”

The pair worked out a plan to save the ski area. Joel’s dad sold his stocks in Fun Valley and bought all the stocks in Seven Oaks. Joel fired himself from Seven Oaks every summer and instead worked pouring concrete, maintaining the ski area on his lunch breaks and after hours. They also worked out a business plan to diversify their income.

Though they didn’t know it then, this dedication and grit would save Seven Oaks. Years later, as the business finally began to take off and attendance increased, Joel needed to find a way to be able to afford the additions of more staff and equipment, so he began researching other areas of recreation.

With the realization that not many Iowans are skiers, but most have been sledding, Seven Oaks added snow tubing in 2003. After learning there wasn’t anywhere near Boone to rent kayaks or canoes, Seven Oaks added a river rental service. Then, they opened the lodge as an event center for weddings and business meetings. They added paintball at the top of the slopes and bought out Gladiator Assault’s mud runs that were held throughout the Midwest and grew them in Iowa.

Today, Seven Oaks is the youngest ski area in the country but attracts visitors from several states, who don’t expect to find anything like it in Iowa.

The ski area has doubled its ski lifts and tow ropes and features 11 slopes for all levels of skiing and snowboarding . Nearly 40 events are held in the lodge throughout each offseason and the river rental service, which started as a minivan and eight canoes, now runs a seven-bus shuttle system and can put 400 kayakers, canoers or river tubers in the water at once. With so much to offer, it's no surprise that Seven Oaks attracts 50,000 to 60,000 visitors each year.

As someone who hates to be idle, Joel continues to envision the future of Seven Oaks.

“We originally named it Seven Oaks Recreation because we didn’t want to be narrow-minded,” Joel said. “I always say to people, ‘You don’t have to leave the state to recreate.’ It always blows me away that we have so many cool recreational opportunities here, but people don’t understand what’s in their backyard. Central Iowa recreation is here, it can only grow.”