Creating inspiration throughout the community

A person having a rough day took a walk to Decorah’s public library to collect their thoughts. After sitting down on the bench outside the front doors, their hand came to rest near a rock beside them. On the rock was painted a message that instantly changed their mood for the better: “Find your fire.”

Not long after, a woman was hiking up Decorah’s Pulpit Rock. She stopped to catch her breath, feeling discouraged at being out of shape and tired when she leaned over and found a rock painted with the inspirational phrase, “You can move mountains.” So she kept climbing.

Such rocks can be found throughout Decorah thanks to the Facebook group Decorah Rocks, a group that uses non-toxic paint to decorate stones with inspirational sayings or happy paintings and hides them throughout the community, posting to the page with clues on where to find them. Community members are then encouraged to participate in the “rock hunting” by following the clues to discover hidden messages throughout the community and either replace them and hide a uniquely painted creation of their own or move their colorful discovery to a new spot. 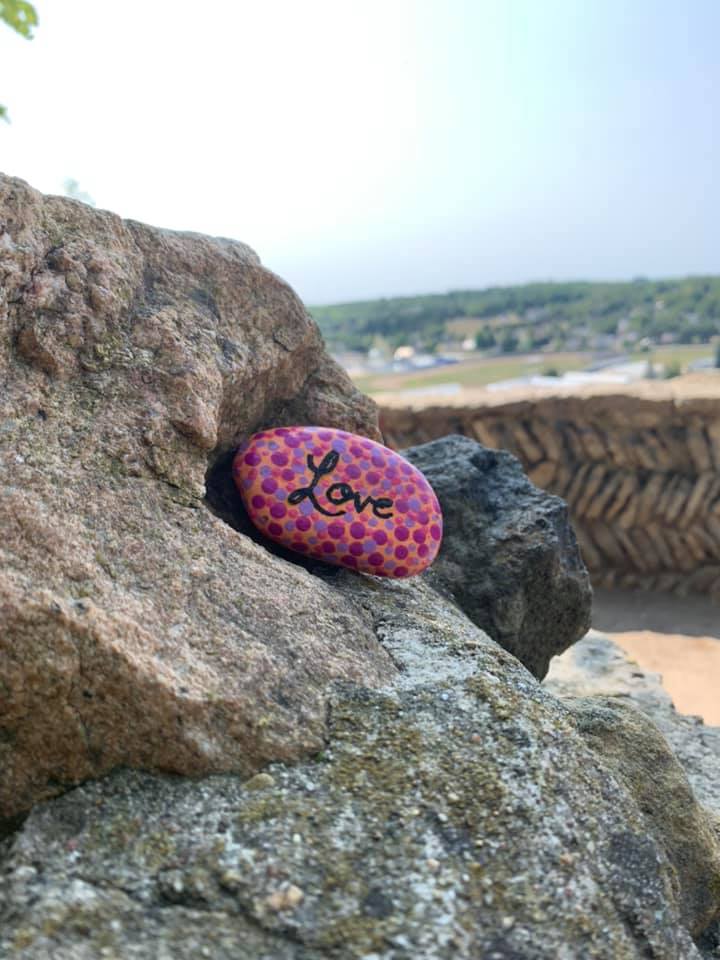 This idea was brought to Decorah by local Maureen Honzik Michel after discovering a similar group on a visit to California, where her brother-in-law gave her a rock he found to take back to Iowa. She loved the joy of finding a rock and thought the concept would be great for an active town like Decorah.

“The whole movement is just inspiring to me,” Maureen said. “Everyone needs a smile or a word of encouragement each and every day and Decorah Rocks provides that.”

While still in California, Maureen and her sisters painted several rocks of their own and Maureen hid them in several states on her journey home. Once she returned to Decorah, she decided to create her own group.

She invited every Facebook friend she had to the page and asked two of her closest friends to be co-administrators to help handle the membership requests. While people continued to join the page, Maureen was the only one painting rocks for a while until others finally joined in on the artistry. Once the pandemic hit and quarantine was ordered, the group took off and is now nearing 3,000 members who are painting and hiding rocks daily.

Stories around rocks inspiring people like the person outside the library and the woman climbing Pulpit Rock proved to Maureen that she had started something great that can truly unite the community and bring people together.

This is something that Jessica Weissenfluh and her two sons can attest to. With an 8- and 5-year-old who already enjoy being outside, rock painting and hunting brought even more joy to the outdoors and created a new activity during a time when most places are closed.

“My boys get so excited when they find one. They squeal and shout and run up to me to show it off. We will usually put one in its place that we brought or leave them for others to enjoy,” Jessica said. “It’s such a fun activity to get out and enjoy the beautiful weather and find new trails to check out.”

Though the group is primarily in Decorah, rocks have found their way to communities across the state such as on a hiking trail in Iowa City, behind the Charles City library and in a grass patch in Waukon. The Facebook group even has members from neighboring states like Minnesota and Wisconsin, but also Texas and South Carolina.

The Decorah Rocks group has therefore proven that any effort, no matter how small, can make a big difference.

“The very best thing about the whole ‘rocking movement’ is the people it has brought together. I know there are families and couples it has brought closer together and personally I have met and made some amazing friends,” Maureen said. “Recently I found an inspirational saying I painted on a rock and have adopted it as my motto. ‘Your vibe attracts your tribe.’ And I am loving my rocking tribe.”